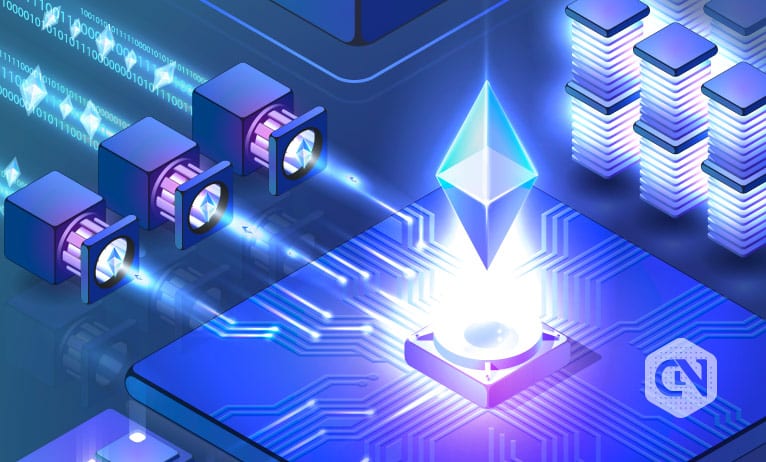 
The Ethereum network is right about to shift from the power-hungry Proof-of-Work (PoW) to an eco-friendly Proof-of-Stake (PoS) mechanism. It’s worth mentioning that the Beacon Chain, Ethereum’s PoS network, was introduced back in 2020 but hasn’t been used for processing transactions yet. The Merge actually stands for the complete transition to PoS and merging of the Beacon Chain with PoW mainnet.

In the continuation of this post, we’ll be diving deeper into the differences between PoW and PoS mechanisms, the difference between ETC, ETHW, and ETH, and address a couple of popular merge-related misconceptions.

What About Gas Fees and Transaction Speed After the Merge?

One of the most common falsehoods about the Merge is that it would reduce high Ethereum network fees, also known as gas fees. These updates are planned but not expected before 2023. As for the transaction speed, it is expected for blocks to be issued every 12 seconds, while they used to be issued every 13-14 seconds. This one second would barely make a difference for the users, but it’s still worth mentioning. Transaction speed updates are also expected to happen within the next 2 to 3 years.

What’s the Difference Between PoW and PoS?

Ethereum’s PoW system, almost identical to Bitcoin’s system, makes crypto miners have to solve complex mathematical problems to complete transactions on the network and produce new blocks. Typically, miners who own ASICs, expensive mining rigs, are the ones able to solve the puzzle first.

In the PoS system, anyone who holds more than $50,000 of value in ETH (somewhere around 30 tokens) can be randomly selected to create a new block. However, the chances of being selected get higher the more ETH validators stake.

PoW advocates claim that PoS carries certain security risks within it since almost anyone can gain control of the network by simply staking as many tokens as possible.

It’s good to know that, even now, you can join a Rocket Pool or Lido staking pool and stake almost any amount of ETH. You’ll be rewarded in staked ETH; you can then sell at a price slightly lower than regular ETH.

Okay, But What Happens With Staked ETH?

Once the Merge is finally over, all staked tokens will remain locked for the next 6 to 12 months. After this period, users will be able to withdraw both the stake and the rewards. If you stake some ETH, be careful not to go offline; otherwise, the amount of rewards may drop down a bit. Those who are not tech-savvy can stake ETH via a centralized service that will ensure that their stake is safe and sound for a small portion of your staking reward.

How Do I Claim My PoS ETH Tokens?

You don’t! As long as you hold some ETH before the Merge, you are good to go. Note that the balance on your wallet will remain the same, and you can do whatever you want with the tokens after the Merge as if nothing has changed.

The old tokens would be actually burnt and replaced with ETH2 without you even noticing! However, there will be many things happening in the background since node operators and software providers will have to make sure that they are using the latest version of the network.

Is the Entire Ethereum Community Bullish on ETH 2.0?

Although the majority of the Ethereum community and society, in general, support the PoS consensus for its environmental impact, not everyone is overly excited about it. In fact, it’s miners who are left unhappy and with not so many options. They can sell their equipment, buy enough ETH to become a validator, and embrace PoS or start mining altcoins since ETH mining will soon become a part of history.

So, simply said, PoS would leave the entire Ethereum mining community cold-shouldered, which is why miners are trying to come up with alternatives. A group of Ethereum miners who don’t like either of the options intends to create a hard fork and not migrate to PoS but stick to the PoW consensus mechanism after the Merge. Keep in mind that the Merge affects individual miners and not mining pools that are also shifting to staking (F2Pool as an example).

This new network that’s in the works, called Ethereum Work (ETHW/ETHPoW), would actually be a fork of a fork since Ethereum is a fork of Ethereum Classic (ETC), the original chain and the second largest PoW blockchain, right after Bitcoin. Thus, we’d have three cryptocurrencies circulating, ETC, ETH, and ETHW.

Taking ETC’s increase in trading volume and price movement during the past few weeks into account, it looks like plenty of miners would join the ETC and not the ETHW community. However, both sides are doing their best to expand the circle of miners supporting them, and we’re yet to see the outcome of this entire situation.

Some of the most popular crypto exchanges, Coinbase and Binance, announced that they would consider listing ETH forked tokens, ETHW included. Still, you’ll agree that claims like these are simply not enough for users who want to get their hands on the ETH PoW tokens. OpenSea, the largest NFT marketplace that supports Ethereum NFTs in the first place, said that they wouldn’t support NFTs built on any ETH forks.

Yet, some crypto exchanges, like ChangeNOW, always put their users’ interests first. Thus, ChangeNOW will definitely list ETHW as soon as (, and if) it sees the light of day. This non-custodial platform listed both ETH and ETC a while ago, and now, they’re open to listing new, forked ETH tokens, too.

How Do You Get Your Share of ETHW Tokens?

We reached out to Mike Ermolaev, Head of PR at ChangeNOW, and he explained that users who have some ETH on their wallets at the time of the work would receive the same amount of ETHW tokens after the fork.

He also mentions that, ideally, you should use a non-custodial wallet like NOW Wallet instead of an exchange wallet for the reasons we mentioned above and the uncertainty about exchanges listing ETHW tokens in the first place. So, let’s say that you are holding your ETH on an ETH Wallet. That means that you would automatically get your portion of tokens after the fork.

On the other hand, if you are holding your ether on a layer 2 network such as Arbitrum, Optimism, or Polygon, you won’t be able to get ETHW tokens. The same goes for wrapped ETH tokens (wETH) and tokens held in liquidity pools.

Thus, Mike says, you should transfer your ETH from layer 2 networks to a layer 1 wallet, unwrap ether, and withdraw it from liquidity pools (that, by the way, could suffer from a liquidity crisis right before the fork) to receive ETHPoW tokens.

After months of delays, Ethereum is about to migrate to a more scalable, energy-efficient mechanism. No matter your outlook on Ethereum 2.0, you can make decent profits by taking advantage of the current situation and the division in the ETH community. To be able to do so, you should choose the right Ethereum wallet, the one that supports the original version of Ethereum as well as all of its hard forks and forked tokens.

No doubt, ChangeNOW’s NOW Wallet can provide just that, while other products built by this crypto exchange, such as NOW Payments, can make it easy to start accepting payments in any cryptocurrency, ETH, ETC, ETHPoW if it goes live, and many other. Visit ChangeNOW’s website to learn more about the exact benefits of using a non-custody service.