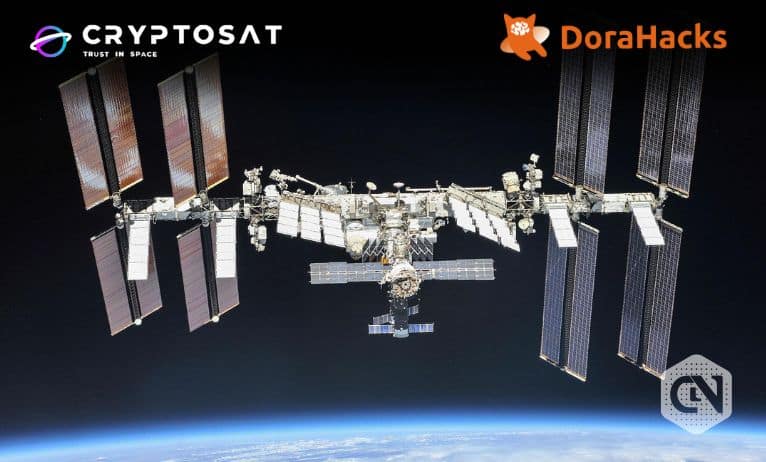 
The phrase “to the moon” is prevalent in cryptocurrency circles. Cryptosat and DoraHacks take that principle to the heart following their experiment at the International Space Station (ISS). Both parties ran a cryptographic trusted setup for zero-knowledge proofs in space.

It is the first time a team successfully conducts a ZK-proof system in space. Cryptosat, a renowned crypto-satellite developer, and DoraHacks, the global hackathon organizer, joined forces to make this happen. More importantly, the experiment was conducted aboard ISS, giving this even more allure.

The trusted ZK-proof setup highlights the potential of using satellite-based computation environments. Contrary to what some thought, such an environment can prove viable to perform zerk-knowledge cryptography. While the venture illustrates the viability of performing a part of the trusted setup process, it marks a crucial industry milestone.

Cryptosat is determined to create a fleet of satellites. That fleet will consist of various CubeSats launched into orbit over the coming years. The experiment aboard ISS confirms it is a viable approach, regardless of concerns over connectivity cut-outs.

The ISS maintains a radio frequency link with a ground station, which proved crucial in making this approach successful. In addition, the team used pre-uploaded open-source programs to generate a string file for DoraHacks’ ZK proof-based voting.

The CubeSats-based approach by Cryptosat is intricate. These CubeSats establish a workable environment for trusted setups, which impartial parties can manage. Such a setup can be used for various purposes, including private ballots or random beacons.

“We are excited to unlock the possibility of running trusted setups for Zero-Knowledge schemes in space. The ability to perform a trusted setup in a completely isolated environment is key in making efficient SNARK schemes much more widely used, secure, and easier to iterate on. By having Cryptosat participate in the ceremony, we guarantee there is at least one party out of this world, making the ceremony more secure.”

However, Cryptosat acknowledges the limitations of its current approach. Without a growing satellite fleet, the approach is only viable for lower-bandwidth use cases. Therefore, expanding the fleet remains a crucial priority for the team.